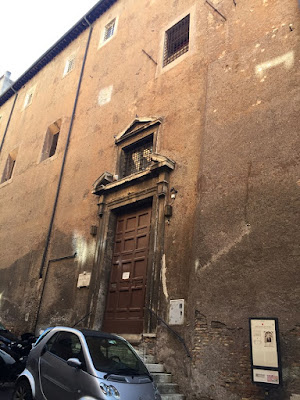 where: Via in Selci, 82
getting there: metro linea/B - Cavour, 2 minute walk

open: the church seems only to be open on Sunday mornings

The nunnery and church of Santa Lucia in Selci is a short walk from San Pietro in Vincoli and worthwhile a visit if you are lucky enough to find it open.
The church, dedicated to Saint Lucy the 4th century virgin saint, was originally built in the 8th century and remodeled by Carlo Maderno in 1604. It was again altered in the 17th century by Francesco Borromini who made many changes inside.

inside: The church has a single nave with three chapels on either side.
The beautifully decorated barrel vaulted ceiling showing the Glory of Saint Lucy dates to the 19th century and is by an unknown artist.
The high altarpiece of the Annunciation is by Anastasio Fontebuoni.
At the first altar on the right is the Martyrdom of Saint Lucy by Giovanni Lanfranco and in the second chapel is the Vision of St Agustine by Andrea Camassei.
The Landi Chapel is the first chapel on the left and holds the Holy Trinity by Giuseppe Cesari, who also painted God the Father above the entrance of the church.

If you walk along the building near the church entrance you will see a door from the 15th century. This was used by poor and unwed mothers who left their unwanted babies here anonymously to be given into the care of the nuns.