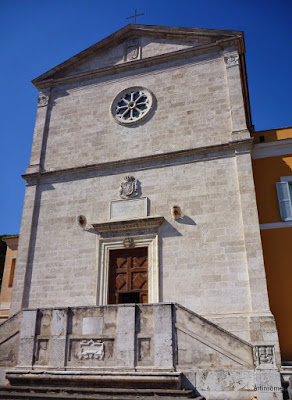 Above Trastevere, near to the white marble fountain (Fontana dell'Aqua Paola) on the Gianicolo Hill, is San Pietro in Montorio.
A church was first constructed here in the 9th century – during medieval times here was believed to be the place Saint Peter was crucified upside down.
In the early 16th century a new church was built and Bramante was commissioned by Queen Isabella and King Ferdinand of Spain to design the Tempietto (1502) in the cloister, to mark the place where the saint was thought to have been martyred. Because of his Spanish connections the Spanish Borgia pope, Alexander VI personally oversaw the consecration of the church.

Once, at the high altar was the Transfiguration, one of Raphael's last works, but during Napoleon's occupation of Rome it was removed and taken to Paris. When the painting was returned to Rome it was then sent to the art gallery in the Vatican Museums.
At the high altar is the Crucifixion of Saint Peter by late-Baroque artist Vincenzo Camuccini. This is a copy of Guido Reni's painting, also now in the Vatican Pinacoteca.


On the right hand side of the church, starting at the first chapel, is the Flagellation of Christ (1518) by Sebastiano del Piombo.
In the second chapel is the Madonna of the Letter fresco by Niccolò Circignani (il Pomeranccio) dating from 1550.
In the fourth chapel is Giorgio Vasari's ceiling fresco. He also decorated the fifth chapel with the Conversion of Saint Paul.

On the left side of the church, in the first chapel are frescoes by Giovanni de'Vecchi.
The second chapel on the left was designed by Gianlorenzo Bernini in 1640.
The fourth chapel was decorated by Dutch Baroque artist, Dirck van Baburen. Influenced by the style of Caravaggio, this was his most important commission in Rome.
The last chapel on the left is the Baptism of Christ attributed to Daniele da Volterra.

The tragic story of Beatrice Cenci is entwined with the history of the church. She was a young Roman noblewoman condemned to death by Pope Clement XIII in the 16th century after her involvement in the murder of her abusive father. Her will requested that she be buried inside the church – although there is debate to whether she was interred at the high altar or in another chapel. 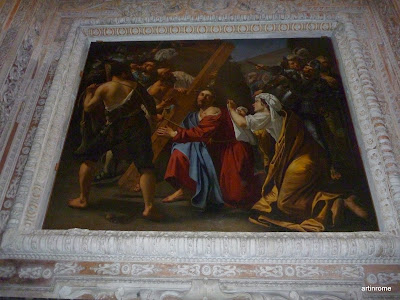 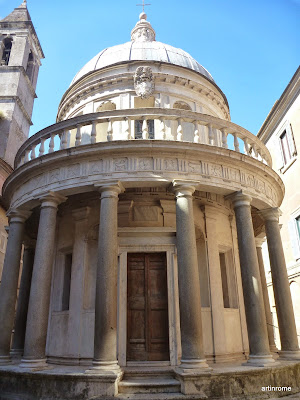