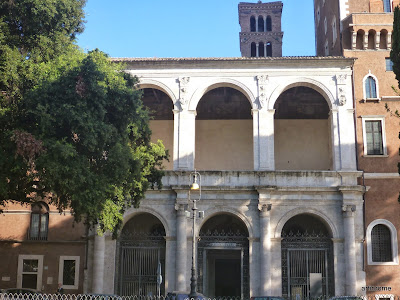 
This serene, dimly lit church is located a few steps away from the chaotic traffic on the busy Piazza Venezia.
The church, one of Rome's oldest, is dedicated to Saint Mark the Evangelist and was founded in 336 by Pope Mark.
The church has been rebuilt and restored many times during the 5th, 8th and 9th centuries and it was restored yet again between 1455 and 1471 by Cardinal Pietro Barbo (who later became Pope Paul II) while building his family palace, the Palazzo Venezia.
In 1744 the church was remodeled in the Baroque style by Filippo Barigioni.

An interesting funerary plaque on the right hand wall of the portico belonged to Vannozza de'Cattani, who was the lover of the Borgia Pope Alexander VI and mother to his infamous children Lucrezia, Juan and Cesare.

Down the staircase into the church, and starting on the right hand side, is the Chapel of the Resurrection with the altarpiece by Palma il Giovane.
In the next chapel, the Cappella di San Antonio, is the altarpiece of the Madonna and Child with Saints Anne and Anthony by Luigi Primo.
In the Cappella dell'Adorazione dei Magi is the Adoration of the Magi by Carlo Maratta. There is also fresco work in the Altare Pasquale on the left hand side of the nave attributed to him.
In the Cappella della Pietà is a Pietà by Bernardino Gagliardi with the left and right wall frescoes by Jacques Courtois.
The Cappella de SS Sacramento is the last chapel on the right hand side near the apse, and was designed by Pietro da Cortona. The altarpiece of Pope Mark is by Melozzo da Forli and the frescoes above are by Ciro Ferri.
The apse mosaics date from the 9th century.
On the left hand side of the nave, starting close to the apse, is the Cappella di San Michele with the altarpiece of the Archangel Michael Confusing Lucifer by Francesco Mola. The side frescoes are by Jacques Courtois.
Next is the Cappella di San Domenico with the Miracle of San Domenico attributed to Baccio Ciarpi and the frescoes of Saint Frances by Lazzaro Baldi and Saint Nicholas of Bari by Ciro Ferri. 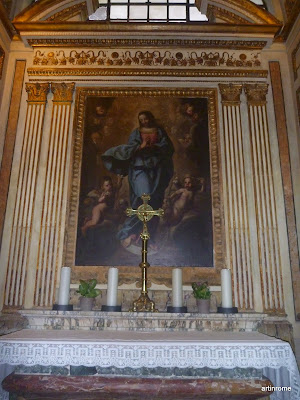