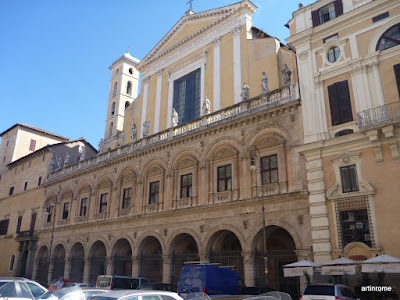 
In the Piazza Santi Apostoli, in-between Palazzo Colonna on the right and Palazzo dei Apostoli on the left,  is Santi Apostoli, a 15th century minor basilica dedicated to the twelve Apostles.
In 1417 Colonna Pope Martin V rebuilt and restored the church (which had been abandoned after an earthquake in 1348) next door to his family palazzo.
In the 15th century the church belonged to Cardinal Giuliano della Rovere (later Pope Julius II) who built the palace next door and commissioned the rebuilding of the portico. Then in 1674, Carlo Rainaldo redesigned the facade giving the church its Baroque appearance and added the statues of Christ and the twelve apostles above.
During the rule of Pope Clement XI Carlo and Francesco Fontana were ordered to restored the interior of the church, completed in 1714.

The inside of the church is dimly lit but richly decorated and worthwhile a visit as on the ceiling of the central nave is the Triumph of the Order of St Francis, one of il Baciccio's last works in Rome, completed in 1707 two years before his death.
The frescoes of the Evangelists and Angels around were added in the early 19th century by Luigi Fontana.
The high altar altarpiece is by Domenico Maria Muratori and is a large 18th century canvas showing the Martyrdom of the Apostles Philip and James the Less. Above in the arch is the fresco by Giovanni Odazzi from 1709 depicting the Rebel Angels Defeated by St Michael. 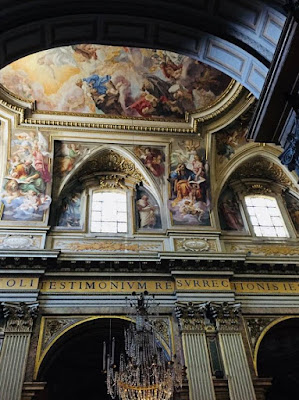 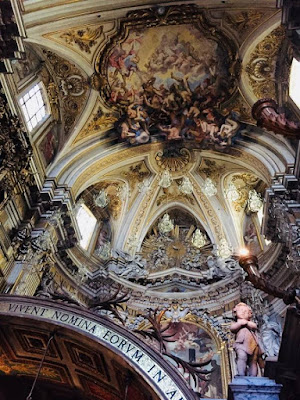 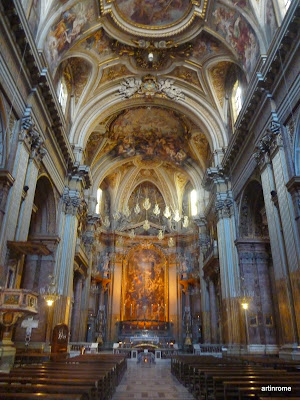