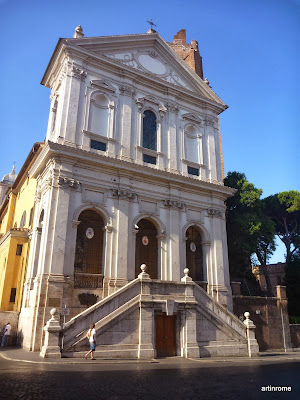 where: Largo Magnanapoli
open: weekdays 7:30–12:00 & 15:00–17:30
getting there: bus 40 stop at Nazionale/Quirinale
The church of Santa Caterina a Magnanapoli is the main church of the Military Ordinariate in Italy.
It was built in the 17th century as a convent church for the Dominican Nuns with funds from Cardinal Scipione Borghese and dedicated to Saint Catherine of Siena.
In 1872 the convent was given to the army and the nuns expelled from the convent.
In the loggia of the church are two giant stucco statues representing saints Dominic and Catherine by Domenico de Rossi.
The interior of the church is Baroque and decorated in stucco, gilding and rich marbles.
The ceiling fresco depicts the Apotheosis of St Catherine, painted in 1713 by Baroque artist Luigi Garzi, who was influenced by Guido Reni.
The dome fresco in the Sanctuary was painted by Francesco Rosa and shows the Glory of the Eternal Father.
The large marble sculptural group at the High Altar dates to 1667. It was sculptured by Melchiorre Caffà and shows the Holy Spirit and the Ecstasy of Saint Catherine. The piece was inspired by Bernini's Ecstasy of Saint Teresa in Santa Maria della Vittoria.
The frescoes in the corridor leading to the sacristy are by Antoniazzo Romano.