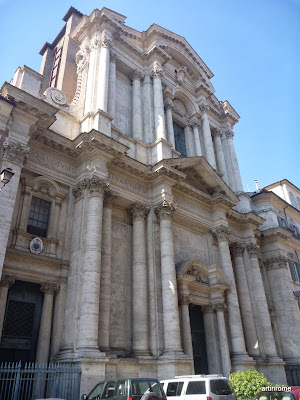 where: Piazza di Campitelli, 9
getting there: short walk from bus 64/stop Venezia, near the Theatre of Marcellus
open: daily 7:00-19:00


The 17th century Baroque church of Santa Maria in Campitelli was designed by Carlo Rainaldi and dedicated to the Virgin Mary. It was commissioned by Pope Alexander VII to hold an 11th century icon of the Virgin Mary which allegedly saved the people of Rome from the plague.

inside:
The icon of the Virgin Mary, surrounded by a Gloria, is displayed at the main altar.
Near the sanctuary is il Baciccio's painting of The Nativity of St John the Baptist.
In the second chapel on the right is Luca Giordano's painting of Saints Anne, Joseph and Mary.
In the first chapel on the left is the Holy Family by Lorenzo Ottoni and the Conversion of Saint Paul by Ludovico Gimignani is in the third chapel.