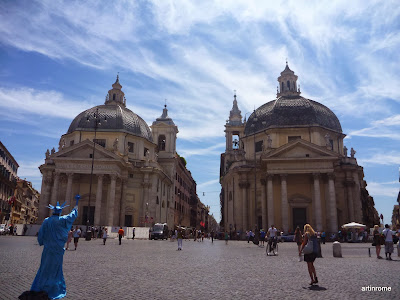 where: Piazza del Popolo
getting there: metro - Linea A Flaminio/Spagna


Santa Maria di Montesanto is on the left of the Via del Corso. The church is a minor basilica, known as the Church of the Artists it has celebrated an Artists' Mass since 1950.
Construction of the church began in 1622. It was completed by Carlo Fontana in 1675 after designs by Carlo Rainaldi and Gianlorenzo Bernini. The bell tower wasn't added until the 18th century.
inside:
The sacristy was designed by Carlo Fontana. The Deposition altarpiece was by 17th century Roman artist Biagio Puccini. The vault fresco, Glory of Angels with the Instruments of the Passion, is attributed to the school of il Baciccio.
In the Chapel dedicated to Santa Maria Magdalena de Pazzi is the ceiling and altarpiece fresco of the miracle of the Saint. It was decorated by Ludovico Gimignani.
In the Cappella Monitoni is the altarpiece of the Madonna with Child and Saints Francis and Jacob (c 1687) by Carlo Maratta. The fresco of the Assumption by Giuseppe Chiari.
In the Cappella di Sant'Anna are the paintings and altarpiece of the Holy Family by Nicholas Berrettoni with the surrounding stucco cherubs by Paolo Naldini.
The Cappella dei Crocifisso holds the Head of Goliath, and Judith with the Head of Holofernes (c 1822), by Ferdinando Cavallori.

inside:
The church is decorated with beautiful creamy stucco work by Baroque artist Antonio Raggi, who was a pupil of Bernini.
At the high altar is the painting, Santa Maria dei Miracoli, for which the church is named. It is by an unknown artist and is surrounded by four of Antonio Raggi Baroque angels.