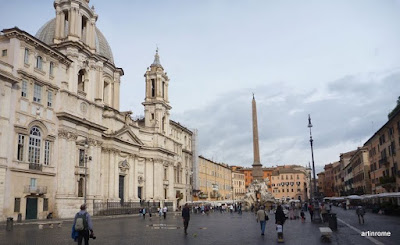 
Sant'Agnese in Agone is a 17th century Baroque church designed in 1653 by architect Francesco Borromini for the Pamphilj pope, Innocent X.
It was built on the site of a previous church dedicated to Saint Agnes, a young virgin who was martyred in the 4th century. Agnes refused to be married as she had promised herself to God, so she was tortured and sent to a brothel, her modesty was saved by the miraculous growing of her hair to cover her nakedness, she was then condemned to death.
Beneath the church are the Roman ruins believed to be the crypt where Saint Agnes was humiliated and can be visited via a staircase behind the left pillar of the altar of St Alexis.

The church interior is decorated with statues by Baroque artists Alessandro Alegardi, Domenico Guido, Ercole Ferrata and Antonio Raggi.
The dome frescoes of the Assumption are by Ciro Ferri (1670) and the pendentives, by il Baciccio date from between 1662 and 1672.

In front of the church is Bernini's Fountain of the Four Rivers. Bernini and Borromini were great rivals of the Baroque, often fighting for the same commissions and there is a legend that Bernini purposely designed one of his giants in the fountain with an arm raised to protect himself from Borromini's church toppling onto the fountain — the legend is clearly untrue as Bernini's fountain was installed well before the church was finished. 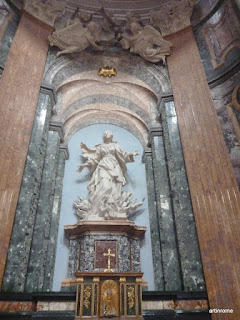 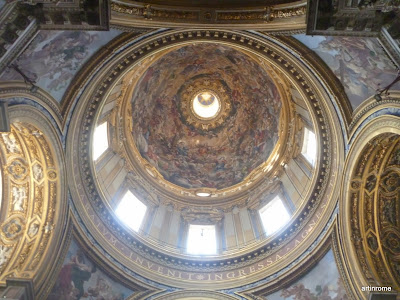