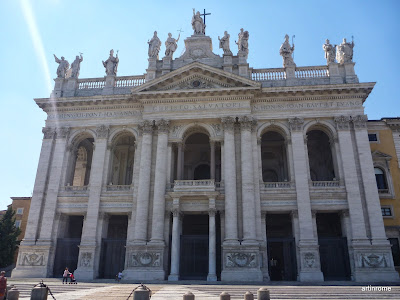 where: Piazza San Giovanni in Laterano, 4
getting there: metro linea/A San Giovanni or bus 85 from Piazza Venezia
open: church: daily 7:00-18:30, cliosters: 9:00-18:00, Museum of the Basilica: 10:00-17:30
information: audioguides are available for a small donation and guide books can be bought in the sacristy bookshop.


The Papal Archbasilica of San Giovanni in Laterano was commissioned in the 4th century by Constantine the Great. It was one of the first churches to be built in Rome and is the oldest of all four of the papal basilicas.
In the 5th century it was sacked by the Vandals and then, in 896, an earthquake almost totally destroyed it.
When it was rebuilt, it was to the same dimensions as the original church, several fires over the centuries have also seen the rebuilding of the church.
When the papacy returned from exile in Avignon to Rome in 1377 repairs began on the church, changes to the inside and facade followed in the centuries after.
The interior of the church is immense with patterned marble floors, giant statues of the evangelists and saints, stucco work, and frescoes.
The church also has fragments of a fresco attributed to Giotto and Mosaics from the 12th and 13th century.
Many artists from the 16th and 17th centuries contributed to the basilica's decorations.
Some of the frescoes on the left and right of the transept – telling the story of Constantine and Saint John – are by Cesare Nebbia, Giovanni Guerra, Paris Nogari, Cristoforo Roncalli, Agostino Ciampelli, and Francesco Trevisani.
Above the right transept altar is the Ascension fresco by Giuseppe Cesari, another of his works, the altarpiece painting of the Apostle Saint John in Old Age with his Disciples, can be found in the Massimo Chapel. 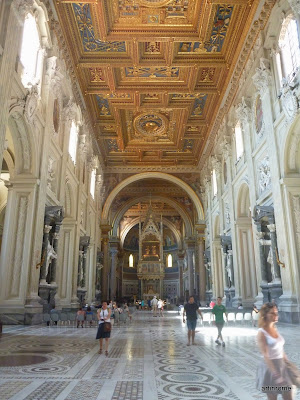 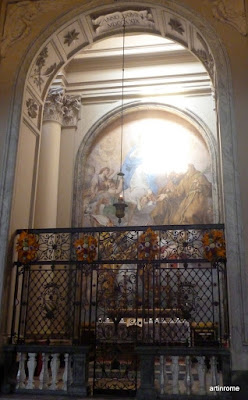 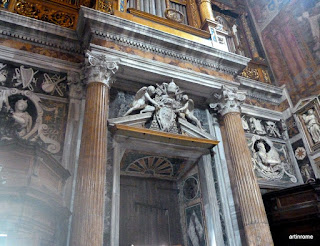 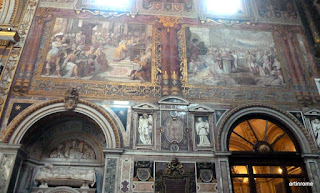