Domenichino 1581 - 1641
Domenico Zampieri was born in Bologna and first began his studying under Denis Calvaert. After arguing with Calvaert he left to join Annibale and Agostino Carracci working in their Accademia degli Incammunati studio alongside Guido Reni, Francesco Albani and Giovanni Lanfranco. The Carracci brothers gave him the nickname Domenichino which meant little Domenico because of his short stature.
Domenichino was one of the most talented apprentices from the Carracci studio and his first commission, the Lady and the Unicorn was under the guidance of Annibale for the palazzo Farnese. When Annibale died in 1609 Domenichino, along with Guido Reni, Giovanni Lanfranco and Francesco Albani became the leading painters in Rome and they competed fiercely against each other trying to gain commissions.
Domenichino was commissioned to paint many altarpieces in Rome's churches including the Polet chapel in San Luigi dei Francesi, the pendentives in San Carlo ai Catinari and Sant'Andrea della Valle and became architect for pope Gregory XV.
In 1631 he moved to Naples where he died in 1641 rumored to have been poisoned by a rival. 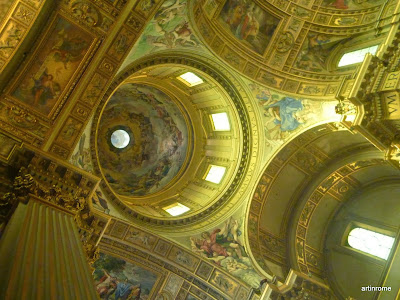